Turmeric : All about this magical spice supplement – Turmeric! 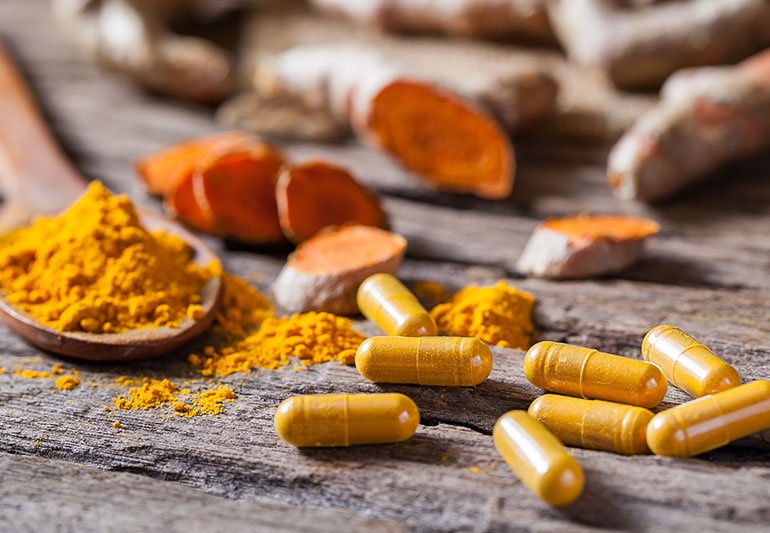 Turmeric has so many uses that it seems almost magical. Its anti-oxidant and anti-inflammatory properties make it a hero of healing. It can be used to reduce arthritis, heart diseases and also improve liver functioning. It also safeguards you skin from acne issues and gives it a beautiful glow!

Home-grown in the Indian sub-continent and South-East Asia, Turmeric is a flowering plant that is actually a member of the ginger family. It is also called as Indian saffron or the golden spice. With an earthy aroma, this yellow plant is widely used for cooking and for its numerous medicinal values. It has been used for centuries and has prominent mentions and features in the Ayurveda as well as the Chinese medicinal literature. In the earlier times before humans knew its different uses, due its strong pigmented color, turmeric was utilised as a yellow dye to color clothes. It is mostly used widely in its powered form. Turmeric powder consists of carbs, proteins, dietary mineral & fibre as well as essential oils. In the modern times the western medicine has started seeing the benefits of turmeric for health.

You’ll never find an Indian kitchen without turmeric, it is utilised in Indian households on a daily basis. It is one of the ingredients in many of the dishes, mostly made in Asia. It enhances the color of the dishes. Right from mixing it in the milk, using it while cooking dishes or applying it on the skin, humans have found innumerable ways to utilise this sunny yellow colored spice. Not in only India, turmeric is used for varied reasons all across the globe, even in the areas where it is not grown. Due to its multipurpose nature, turmeric is imported and exported all over the world on a very large scale.

Turmeric has many uses and benefits. Let’s have a closer look at those

Curcumin is an active ingredient in turmeric renders it the healing powers.

As human beings grow and age, there are a lot damages caused by the oxidation process in the body. Turmeric helps to fight these processes and reduces the effects of these processes by acting as a strong antioxidant. It prevents the hazards of oxidative stress. Turmeric’s powerful antioxidant properties assists the neutralisation process of the free radicals thus avoiding the harm caused by them.

Studies show that turmeric increases ‘Brain Derived Neurotropic Factor’ Levels or BDNF levels in the body. BDNF reduces if the person is depressed, by increasing these levels there can be a change in the depression levels as well. Serotonin and dopamine are responsible for good mood changes in humans, turmeric is known to affect those as well. As result turmeric can actually put you in a happier place.

4) Helps in problems related to Arthritis

Liver is one of the very vital organs of your body. Due to many bad habits and eating disorders, your liver accumulates a lot of toxins. These toxins are extremely harmful for the proper functioning of liver. The anti-oxidant properties of turmeric protects the liver from being damaged by the toxins!

Turmeric has been used for beauty purposes since ancient times. It has amazing skin benefits.

Everytime an acne pops up on your skin, it is an absolute nuisance. It is filled with bacteria and many other harmful elements. Turmeric, as we discussed earlier has powerful anti-bacterial and anti-inflmmatory properties which helps it to combat those acnes and destroy them. It also reduces the swelling and redness caused due to acne. So next time an acne appears out of no where bid a farewell to it by applying turmeric paste on it. You can make this paste with water or with raw milk.

Turmeric is used against the oxidation damages. Due to its anti-oxidant properties it has anti ageing benefits as well which makes it a good remedy to improve the wrinkles on the face. In the process it also improves the elasticity of the skin.

2) Gives you a glowing skin

The rising levels of pollution, stress, bad eating habits and many other factors snatch away the glow from your skin. Even the harmful rays of sun are responsible to make your skin dull. Turmeric’s anti-inflammatory and anti-oxidant properties help you revive the glow of your skin. It also reduces skin pigmentation giving you a glowing skin.

You can also add various ingredients such as yogurt, sandalwood powder, chickpea flour (popularly known as besan) and many more to the above mixtures.

3) Use turmeric to diminish dark circles

Working late in the night, stress, over exposure to screen in the dark, lack of sleep and harmful sun rays are some of the reason for dark circles. People can have dark circles because of hereditary causes as well. Turmeric enhances the blood flow which helps in reducing the dark circles. It also have anit-inflammatory property which supports the diminishing of dark circles.

4) Helps reduce oiliness from the skin

Most of the times many people have a skin that secreates a lot of sebum which is responsible for making the skin very oily. Sebaceous glands in the skin produce this oily substance called sebum, which gives your skin an oily texture and is at times also responsible for acnes and pimples. Turmeric helps regulate the manufacturing of this sebum thus reducing the oiliness from the skin and giving it a glow!

We have already discussed the various health benefits of this magical spice called turmeric. Owing to these health perks turmeric is utilised in many dishes majorly in India and also all across the world. It is used in vegetables, soups, curries and even in scrambled eggs and rice. It gives your dishes and curries a very nice flavour and a rich color. Due to it’s anti-inflammatory and anti-oxidant properties it also helps in digesting the food better.

Due to all these properties no wonder it is a must to have turmeric in our houses!

How to Increase Sexual Performance: 10 Best Ways Men Can Improve And Boost In Bed!